For five years I was the voice of the the world’s most famous groundhog on Twitter, building a community around the prognosticating marmot and driving Groundhog Day buzz.

Phil’s tweets were shared on-air on The Weather Channel and Good Morning America, covered by The Washington Post and Huffington Post, and published in 1:1 interviews with Urlesque and Mashable. 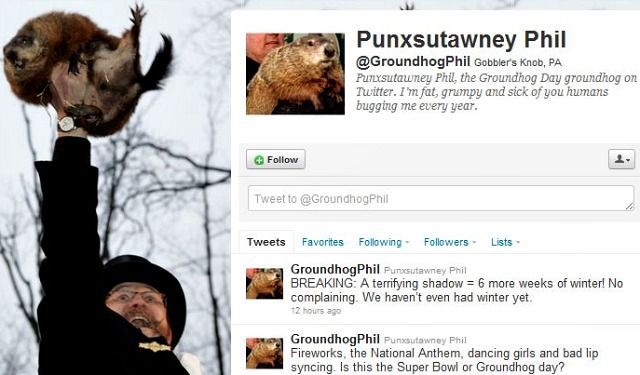 Doug Hamlin and I were the first to name foreboding winter storms “Snowmageddon” on Twitter, back in 2007. Then as early as 2008 and 2009, Doug and I set up live stream cameras, got it mentioned on WCCO CBS-TV News, made t-shirts, and it was a trending topic in Minneapolis — then a national trending topic. We literally had coffee one morning and said, “Let’s try to make a national trending topic today.” This was well before it was included in the Urban Dictionary, and then The Weather Channel started naming every storm. It was part of living in Minnesota and the ironic fear-mongering culture of being afraid of snow. See the Wikipedia entry here.

Around the World with Batman

@WhereIsGregsCar – My Car Tweets by Itself

First I engineered my car to send my wife a notification when I leave from work with “I’m on my way home, honey! Love you!” when I start the ignition. Then I created a Twitter account for the car, @WhereIsGregsCar, and set up triggers to automatically tweet whenever I start the ignition or complete a trip, including distance traveled, gas mileage and estimated fuel cost. Follow @WhereIsGregsCar to see where I am. 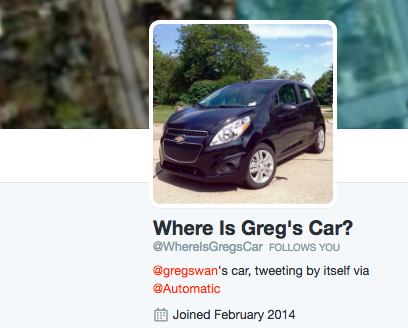 We built an emoji flag translation Facebook Bot for the Olympics. FlagFetch is a Facebook Messenger bot that provides a translation between emoji flags and their country and vice versa. Users can input the Brazilian flag, for example, and receive back “Brazil” or they could say “COL” and it would send the Colombian flag. This allows Facebook Messenger users to very easily lookup and insert flag emojis into their social posts.

I love leaning forward into advancements in wearable technology, so it was an exciting day to build this sandbox projects — wpForGlass, a WordPress plugin that allows Google Glass Explorers to publish to WordPress-powered content portals (20% of the web runs on WordPress). The news blew up! With coverage in Mashable, Engadget, PR Week, and more.

Founded in 2010, Faxbook is the very first fax-based social network, and it’s sweeping the nation at approximately 33.6 Kbps. Download the cover sheet here (PDF). In 2016, someone actually offered me $100 for it, so it’s been monetized.

For over 10 years, I authored a Top 50 music blog (2004-2014) that grew into a monster. Steve Perry, the lead singer of Journey, is the reason I gave it up. During this time, I blogged almost daily and had the opportunity to write reviews for Filter Magazine and SXSW World Magazine. It was named a Favorite Twin Cities’ Website by MSP Magazine, and I had the honor of speaking at South by Southwest 2010 about “The State of Music Blogs” alongside reps from EMI, Capitol Records and music publicity firms.

The Quest for a Perfect Triangle

Since June 2012, I have documented toilet paper folds from hotels across the country. Like, every single hotel I’ve stayed at. See them here.

At the height of the Rickrolling meme (tricking people to click on the music video for the 1987 Rick Astley song “Never Gonna Give You Up“) in 2009, we blew up a photo of Rick, plastered it across a downtown hotel window, and then stood outside blaring the track to passersby at the South by Southwest Interactive festival.

Explain to Minnesotans the Game is Called Duck Duck Goose

In 2016, I approached the Minnesota Wild to be the first organization in professional sports to use the innovative new first-person camera glasses. The challenge was to bring this new tech to life within the bounds of an established social media voice and content strategy, while doing something worthy of the first-person perspective. The result was a best-practice case study, with coverage in Sports Illustrated, Digiday and Mashable. And a South by Southwest panel! CBS Morning News picked up this story, sharing it with 97 local TV markets. Read more about the activation here.

One thought on “PASSION PROJECTS”