(cross-posted from the space150 blog)

Snap, Inc. debuted their new Spectacles in November 2016 and space150, a full-service digital agency with offices across the country, was one of the first agencies to snag a pair.

While we shared our thoughts with the industry (Adweek, Digiday, Adweek), we saw an opportunity to bring their unique perspective to partners and clients — by sharing the first-ever Spectacles story in professional sports.

Spectacles give Snapchat users an easy, real-time way to record videos that get sent right back into the app. They benefit the user by allowing you to capture video without having to take your phone out of your pocket, open Snapchat, etc.

Spectacles also let you capture video without removing you from what you’re doing. Their first-person perspective also makes these videos unique, especially compared to other videos on social networks today.

Here’s a video we shot at our Venice office:

Capturing video on Spectacles is fairly easy: press a button above the top of the left frame and the camera captures a 10 second clip, tap it again and another 10 seconds is recorded – up to 30 seconds per clip. Lights illuminate to show those around you that you’re recording. The Spectacles wirelessly pair to either Android or iPhone through your Snapchat account.

The video can be either standard definition or high definition, though you have to convert the file to HD within the app. Also, an interesting part of the new Spectacles is that they are shot square at 1080×1080, but when displayed they’re circular (see diagram below). This means that users can rotate their phone and see more of the image.

Here’s a GIF that illustrates how this works:

Though they’re filled with electronics, the frames are one-size-fits-all and made from plastic. The case they come in – a yellow, foam-padded triangular prism – doubles as a charging dock. The case will hold an additional four charges.

The glasses can (conservatively) do about 40-50 10-second videos before they need another charge, and with light use they would last all day. Also, keep in mind, as the glasses are drawing on Bluetooth, phone battery will also be an issue – and something to keep an eye on.

Spectacles In The (MN) Wild 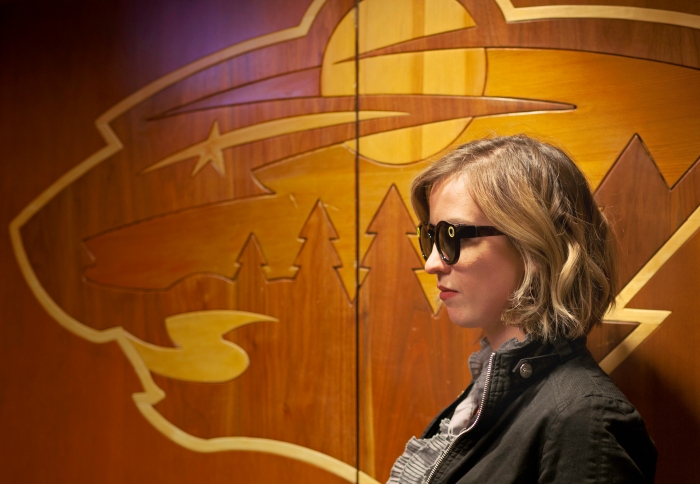 space150 approached the Minnesota Wild to be the first organization in professional sports to use the innovative new first-person camera glasses.

Our challenge was to bring this new tech to life within the bounds of an established social media voice and content strategy, while doing something worthy of the first-person perspective. While GoPro and others have made first-person video approachable, the glasses structure and technicalities of capturing the shot made it difficult to plan and deliver the best story.

To navigate both the organization’s social strategy and the limitations of the glasses, we storyboarded the Wild’s first Spectacles story within three segments: 1) Pre-game, 2) Game, and 3) Post-Game.

Within each segment, we had many shots that we wanted to capture, knowing that many may not come to life or may not fit the team’s social strategy or the limitations of showing game play, owned by the NHL. This structure allowed us to have a cohesive story while being flexible.

We brought a production/videographer, social strategist and design director to film and capture the story, which was a healthy mix of technical and design expertise. A full day of shooting with the camera provided a 2:56 minute story. In the future, this kind of storytelling could be accomplished by one person — assuming they’ve been fully trained and are experienced in POV video production.

Here are the highlights from the first-ever pro sports team Snap Story we helped bring to life:

This effort was a massive success — from the Snap Story completion metrics to the earned and social media buzz to the overall lessons learned.

“In the midst of the Snapchat Spectacles craze, the Minnesota Wild became the first NHL team to debut Snap Inc.’s $129 mustard-colored sunglasses and give fans a behind-the-scenes view through a unique lens. The Wild partnered with advertising agency space150 to bring first-person social sharing to life…

Expect the Spectacles to be the trendiest technology product being utilized by sports teams during the first few months of the New Year.”

Added Greg Swan, VP of brand innovation at space150, in a statement: “We were thrilled to partner with the Minnesota Wild to bring the Spectacles perspective to hockey fans tonight—what appears to be the first time a pro sports team has tested these out.”

CBS Morning News picked up this story, sharing it with 97 local TV markets…

Use your hands! The best selling part of Spectacles is the hands-free, first-person POV. And your viewers want to see your hands doing things.

The files take time to download, especially saving to HD, and social teams should be sure to save files as they go within the Snapchat app. As stated above, the stated battery life is 100 10-second videos. However, we found that this number is closer to half that, so be sure to keep the Spectacles on their charging case when they’re not in use.

In terms of actually shooting video, be aware of your head movements and things like hair that could get in the way of your shot. In addition, the microphone is very sensitive, so things like chuckling, breathing and laughing will all be picked up. Be intentional about your head movement, but note that is very obvious when the recorder slows movements down. And the shot angle is wider than you would expect, so be sure to clear anything you don’t want in the shot from your periphery.

One of the most important take-aways is that once the button is clicked, Spectacles are recording and those stories cannot be edited. We recommend taking 2-4 prep shots before starting your story.

Remember: shoot order is the same as post order – you cannot change the order of snaps in your story. Determine the best shots and their order before starting. We used a simple word document to track and optimize the best shots as we went through the shoot.

WHEN ARE SPECTACLES A GOOD IDEA?

As we wrote about last week, first-person point-of-view content is some of the most compelling content for three reasons: subject, location, and experience.

Although Spectacles are intended for Snapchat-only, marketers should pay close attention to Snap’s overall impact on video production and consumption trends. There are leading indicators here worth noting. Snapchat popularized the vertical video format, which caught many by surprise. Yet just this September brands began prioritizing vertical content for Facebook.

Vertical video has always been preferable on mobile phones, but never before did a social network — including YouTube — prioritize vertical video. But Snapchat made is the gold standard. Now Snap is introducing first-person point-of-view through vertical social video — with no head-mounts or Go-Pros required.

If this popularizes as fast as vertical video, we could expect to see spectacle-eye-view video permeating not just Snapchat, but starting to come into other social channels and marketing channels in the coming year.

Will we all be wearing Snap-branded glasses in the future? Probably not. However, we’re excited about the continued innovation in wearable technology and how it impacts social engagement.

4 thoughts on “How we brought Snapchat Spectacles to pro sports, starting with the MN Wild”