This work is licensed under a Creative Commons Attribution-Noncommercial 3.0 Unported License.
Posted on November 6, 2016June 26, 2020 by Greg Swan

The Pioneer Press interviewed me about the last 6+ years traveling with Batman. Here are some quotes….

Greg Swan used to travel for business much more than he does now, and it was tough on his 4-year-old son Grant… and on him.

So one day in 2010, just before a trip, “I asked Grant if he would like me to bring something… along to keep me company,” Swan said. “Batman was the toy of choice.”

Swan, a onetime St. Paulite now living in Chaska, began taking shots of the “Batman: The Animated Series” action figure during his trip. In his spare moments, he’d pose the toy with tourist-y backdrops as if the superhero were on a trip of his own, and send the pictures to his kid.

He never stopped, using the action figure as a photo prop on trip after trip, and the toy has since become a bit of a social-media sensation.

Swan was in a similar bind, with hundreds or thousands of miles separating him from his family, and feeling his trips wear on him. Batman was — and still is — a big help.

“I’ve traveled a ton for work, 400,000 airline miles, and with that comes a lot of sacrifice,” Swan said. “Having the Batman figure causes me to pause a busy day, think about my family, seek out an experience, take a photo and share those moments” with the loved ones back home.

“In effect, it makes my travel life better,” said Swan, who now works at the Minneapolis-based Space150 advertising agency (a job that has him traveling less often than his previous one at the Weber Shandwick public-relations agency).

The Batman toy “has traveled to Puerto Rico, Honduras, Belize, Jamaica, Canada, Alaska and Mexico, and dipped his boots in three different oceans,” he said. “Many notable figures have met Batman, including NASA astronauts, Smokey the Bear and Donald Rumsfeld.”

He recalls that Rumsfeld’s bodyguard “was not impressed” — but the former U.S. defense secretary was a good sport in posing for a photo.

“You should see the looks I get at the airport,” Swan said. “Just a grown man with a pocket full of toys taking pictures and selfies for his kids. Nothing to see here.”

His many social-media followers, on the other hand, are ever on the lookout for Batman and chide Swan if he posts travel photos that don’t include the Dark Knight.

The Caped Crusader now has company.

“Grant is 10 years old now, and I can text photos to him directly, So fewer of them end up on social media,” Swan said. “But now his little brother and sister are in on the action. Which means just last week, on a trip to New York, I was carrying Batman, Cinderella and an R2D2 in my pocket – seeking out special places and moments to share with the entire family.” 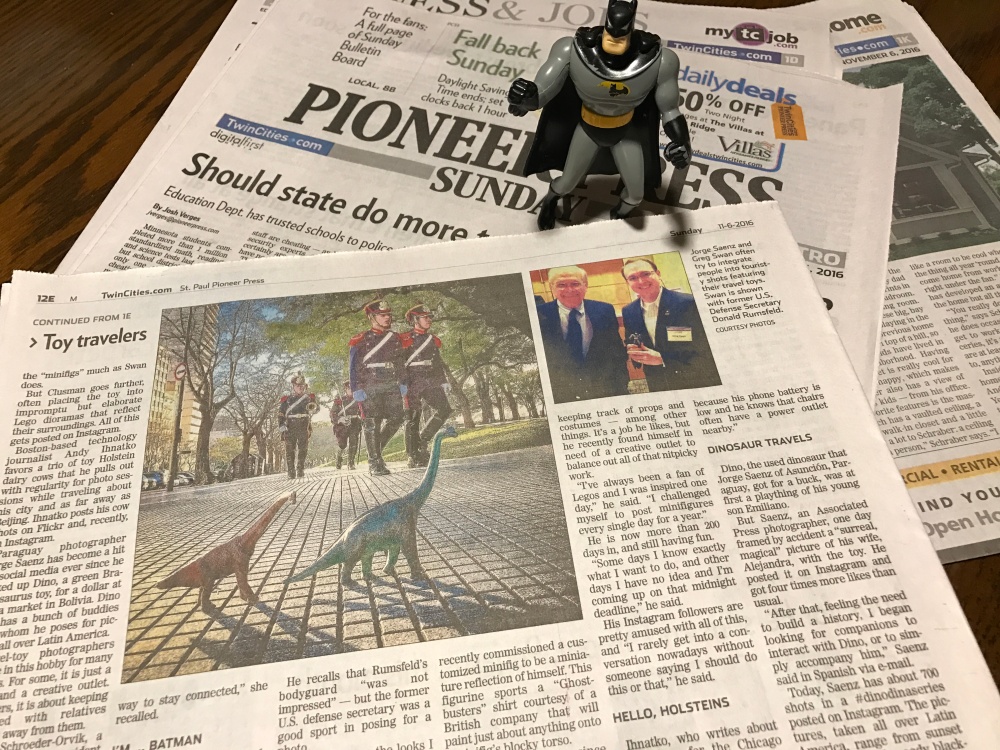 See more pics from Batman on this blog here.