This work is licensed under a Creative Commons Attribution-Noncommercial 3.0 Unported License.
Posted on August 20, 2014 by Greg Swan 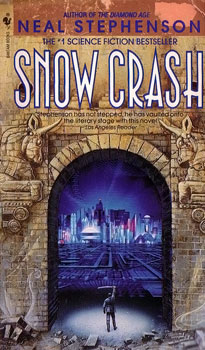 Per my ongoing fascination and excitement for Virtual Reality: Science Fiction Realized, Facebook’s acquisition of the Oculus Rift, Google Cardboard, and the new Photo Sphere 360 photo app (that looks poised to help consumers create VR content), this quote from Dan Hon’s eNewsletter was worth sharing today.

Hon has been going back through Neal Stephenson’s 1992 cyber punk novel, Snowcrash (it’s a must-read!!), and often makes references of how the Metaverse could come to fruition in real life through VR (or often, how our offline and online lives are continuing to blur as only the science fiction greats could have predicted!)….

“I mean, I’m really interested to see if, post-public-Oculus and its backing from a multinational, billion-user social network, we actually end up with something like what Stephenson suggests with The Black Sun [ed. note: an exclusive online Metaverse club].

I mean, we kind of had it with Habbo Hotel, we didn’t really have it with Second Life (because the deal with Second Life wasn’t so much social as it was Hey! Build stuff in 3D! and the deal with Habbo Hotel and Virtual Magic Kingdom and all the other stuff was “chat software rocks”). No, I mean the whole thing about movie stars using it to “visit with their friends” and “strut their stuff”. I mean, seriously.

We’re about 12 months out from seeing if this is *actually going to happen*, and that’s pretty phenomenal.

Put it this way: you think single-camera amateur YouTube shows are a big thing? Imagine live streaming from an Oculus Rift instance, and allowing people to drop by.

—Dan Hon’s Things That Have Caught My Attention eNewsletter, #141

So if he’s right and we have <12 months to see if this VR stuff really pops, what brands and publishers will be leaders in the space? What will we do to help make this a reality?

And if he’s wrong, that’s fine, too. But I can't imagine some semblance of VR/Metaverse not becoming popular as hardware matures, prices improve, video games moving into immersive environments… and the fact that we're exporting more human connectivity to digital experiences than any generation before. It’s definitely worth exploring.

If you haven't yet had a Rift or Google Cardboard demonstration, you have to make it a priority. Heck, Cardboard costs <$20 put together! And some apps work on iPhone, as well as the standard Android app.

We live in an exciting time, and on this timeline, it may get more exciting quickly!